Skip to primary content
During our stay at Cape Breton, we camped at the KOA in North Sidney.  This is the largest campground in the northernmost area of Cape Breton Island.   While we were in Quechee, VT we had met a work camper who strongly suggested that if we were able to stay at the KOA in North Sidney, we should request the upper tier.
We did and we got it.  When we arrived however, no one had prepared us for how tight the area was to back into. You can see from the photo how narrow the road up the mountain was.  John did a beautiful job backing the unit in and surprisingly it did not take many attempts.
We were not disappointed.  The views were wonderful. 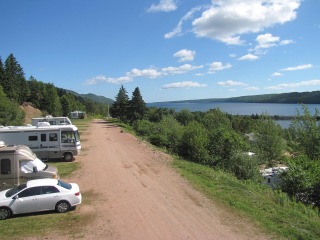