Sorry… it’s been a long time, since our last update.

We arrived at the Mount Pleasant KOA in Charleston, SC in early November, after an overnight stop in Tampa to visit John’s nephew, his wife and beautiful daughter, Rick, Merritt and Logan.  Logan was born in May and we had not had the opportunity to meet her.  It was such a joy to see them all so happy.
We also made a quick stop to visit John’s mother and from there we took off for Charleston.  After a long 7 hour drive and arriving in the dark, which we immensely dislike for obvious reasons, we settled in the campsite, connected only the electricity and water and retired for the night.
The following morning we woke up and opened our blinds, only to be instantly shocked!  WHERE WAS OUR VIEW!!!!  The water was gone, and so were the palm trees.   REALITY!!! On the really bright side, Camden was close by.

This campground has a beautiful lake, surrounded on one side by log cabins and on the other with a one mile long nature trail, which we walk each morning and afternoon with Jackson.  He absolutely loves the smells of all the deer, rabbits and who knows what else is in those woods. 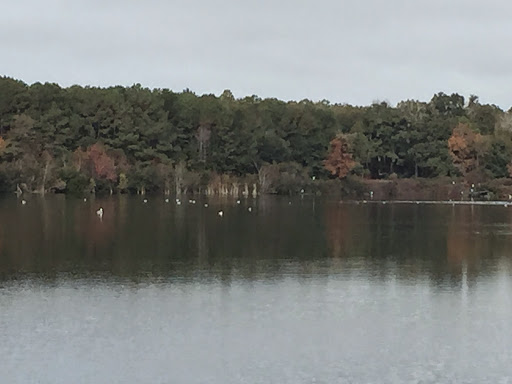 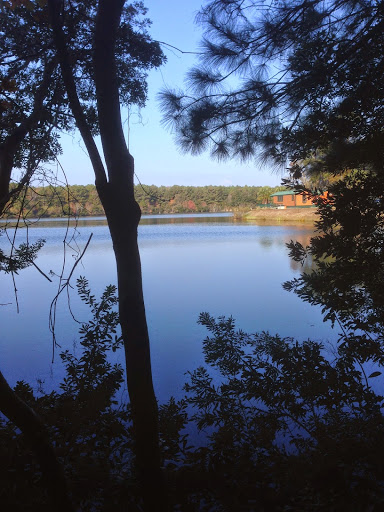 Deer on the trail… 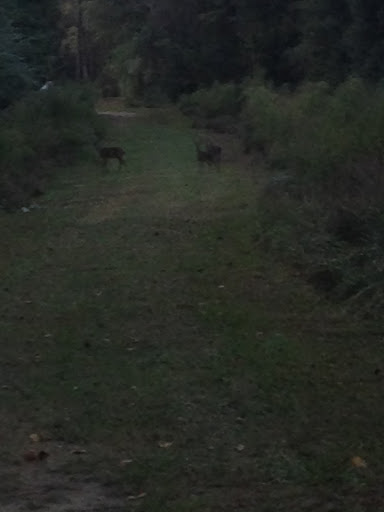 Our friends from Beaufort, SC, Tommy and Linda Sexton, (the friends who took us hog hunting) came over for a weekend along with our friends, Richard and Bonnie Waltman, who recently sold all their possessions to also begin full-timing in their RV.  We had a great time.  We visited a Secession re-enactment at Boone Hall Plantation, a Vietnam War memorial and toured the USS Yorktown, which I had never visited.

I remembered that while we lived in Greenville, SC, our daughter, Katrina, had spent a weekend at the USS Yorktown for her 5th grade field trip.  I called her to tell her where we were and she told me that the USS Yorktown reminded her of the place where she had probably the worst grits in the world.  She remembered inserting a spoon in her bowl, the spoon getting stuck in the grits and up came the entire bowl.  Yuck!

At night time, we had campfires and I know it’s hard to believe but since I was never a girl scout, Linda initiated me and made me fix my very own s’mores, which even though I have had before, I had never fixed on my own.  For dinner, I had to cook my own hot dogs over an open fire.  I had always cooked them on a stove immersed in beer or John would cook them on the grill.  All I know is that I really should not do these things on a regular basis or I will lose my perfectly honed skills at making reservations!

A week after we arrived, we survived our very first nasty cold front “ever” in the RV.  The temperature dipped to the mid 20’s and for the first time we used the jetty package. After making several phone calls to find out what to do… Yay! nothing burst and we didn’t freeze!
Now, I must gloat!

We came to Charleston to help Randy and Carolyn with Camden for little while.  We found that our little tike must have over 100 facial expressions.  He is such a happy little boy.  We were told by so many about the joys of being grandparents.  How right they were, there are no adequate words to describe how we feel.

He gets bigger and bigger each and every day.

I just love my swaddle 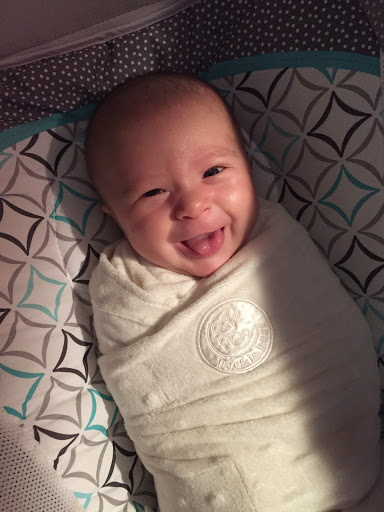 Ahhh…. what a nice stretch!

Getting ready to roll…. 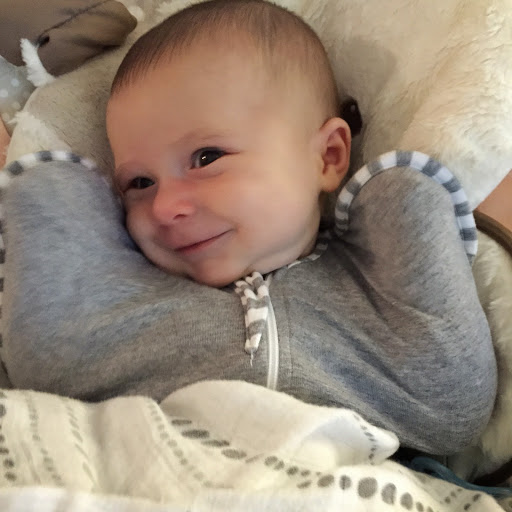 Since daddy is a chiropractor, Camden gets adjusted regularly 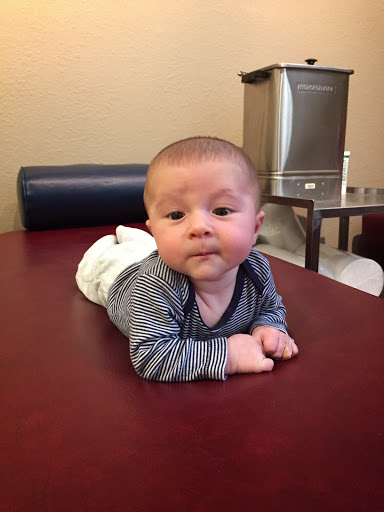 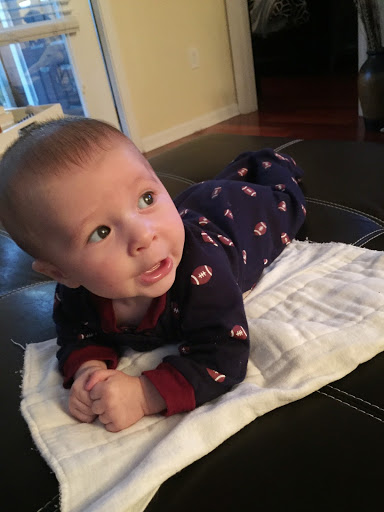 Our daughter, Ashley, returned to the states from Curaçao so she could meet Camden, and visit with the family over the holidays.  She applied for and was granted a work permit but is awaiting the Curaçao residency permit.  She has been staying in the RV with us and it was wonderful having her with us as we hadn’t seen her since January.   She will be going to New York for New Year’s Eve and then on to Denver, CO for a bit until she receives notification that she is allowed to return to Curaçao.  She has turned into a fine young lady who lives her adventurous life to the fullest without hesitation.  What a gift!

Our friends from Greenville, Bruce and Mary Clare Hadsell, came to visit us and we partied in downtown Charleston.  We had a great time and promised to join them for New Years.  They gave us an adorable christmas ornament, a Santa resting on a hammock, which reminded them of when I was resting on our hammock down in the Keys, after having several unbelievably amazing Casa Marina mojitos.  I decided to hang Santa from the knob on our liquor cabinet.  The following morning… well Santa apparently had a few of his own as well.

We connected with Kelly and Doug Williams, a really fun couple whom we met at the corner of Duval and Green (Corner of Sloppy Joe’s) during Fantasy Fest in Key West and who happen to live in nearby James Island.  We have had the pleasure of dining, wining and partying with them on several occasions and it has been lots of fun.

Katrina drove from Napa, California to Fort Collins, Colorado, where she has decided to settle, to drop off her belongings.  From Fort Collins she drove south to Florida and then back up to visit us for the holidays.  It was really nice to see her and even better to have all our ducklings in one place which will probably become more and more rare as the family continues to grow. 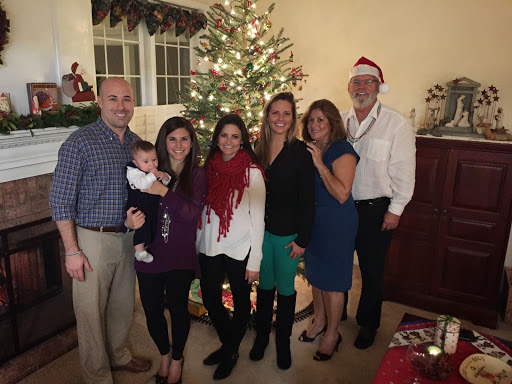 From left to right:   Randy, Camden, Carolyn, Katrina, Ashley, Me and John

Randy and Carolyn hired a nanny for our sweet Camden and so we left for Greenville to party with Bruce and Mary Clare for New Year’s Eve, after which we will head south to central Florida to experience the “real” snowbird lifestyle, which will be a first for us.

We will keep you abreast of our travels as we have planned a full year of n ew adventures.