We arrived at the KOA campground near Hot Springs National Park.  We decided to go downtown and walk through Bathhouse Row, just to get our bearings.  I was drawn to Buckstaff as it is the oldest traditional bathhouse still in operation.  All the other bathhouses except for Quapaw which, in contrast to Buckstaff, offers moderns pools, now serve as either museums or visitor centers, etc.  So off to Buckstaff we went.  The ladies’ floor was on the second floor, while the men’s was on the first floor. 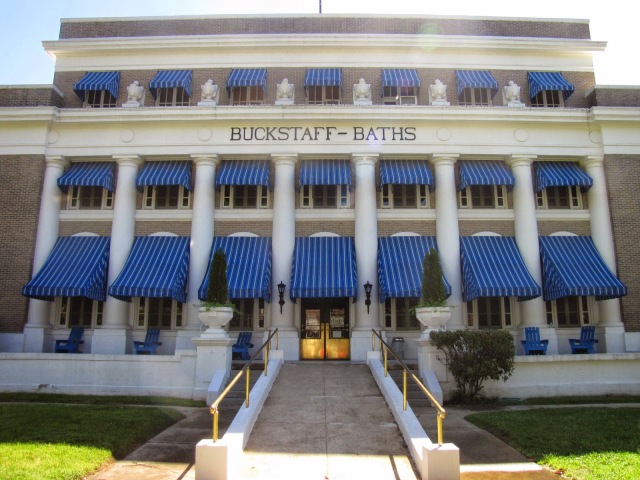 I can only speak as to my experience, as John and I were separated.  I was taken into a metal sided dressing room which contained two lockers, just like the ones I used when in middle school, tall and narrow.  I was asked to remove my wardrobe and hang them in the locker.  Soon after, an attendant came with a bed sheet and wrapped me in it, just like a toga.

The way there were: 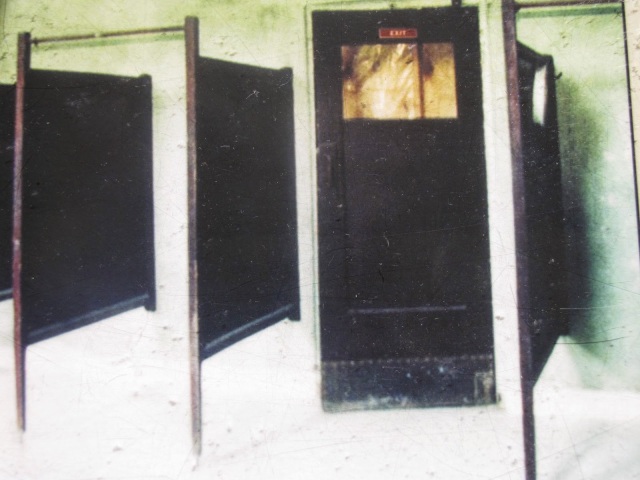 Neither cameras nor cell phones were allowed in the treatment rooms, so I will instead narrate from my perspective:

From the dressing room, I was taken to another cubicle containing only a porcelain tub with a whirlpool, full with hot mineral spring water awaited me.  My bath attendant, Mattie, had over 35 years experience.  She actually used my loofah mitt and rubbed my back, my arms and my legs.  Heck, the last time someone bathed me like that, it was when I was a very little girl by my nanny in Peru.  I almost asked Mattie to make sure she didn’t miss behind my ears.  I was left to soak in hot, hot water, and asked to sip hot water for about 20 minutes.  I’ve never done that before.
From the soaking bath, Mattie wrapped me up again and took me to a cooling room.  I was asked to lay on a bed where I was wrapped with incredibly hot wet towels.  One for my back, one for my neck and chest and one for each of my legs.  The one interesting thing was that I was asked to drink ice water before the hot packs were applied and to chew on ice cubes when the hot packs were applied.  Amazingly after the initial shock, it felt very relaxing.
From the cooling station, I was taken to a vapor cabinet.  This was actually a sauna, a small closet in which I was asked to sit with only my head exposed.  Mattie wrapped towels around my neck so the vapors would not escape and would concentrate on the body.  After a while, she removed the neck towels, so that I could inhale the vapors.  She said it would open the facial pores and clear the sinuses.  I felt like a mole waiting for someone to hit me on the head.
After that, it was time for a sitz bath, also filled with hot mineral water.  This was a deep porcelain sink which sat on the floor and where I was asked to slip in.
The final stage was to take a needle shower.  This was a round spray which showered you with luke warm water, which acted as a coolant for the body.

I was not uncomfortable at all as I was wrapped in the toga all the time when I went from station to station.  After being wrapped so many times, I am now ready for a toga party.
Except for the floors and stalls in the dressing room, the entire bathhouse was all white.  The walls were white, the porcelain tubs and sitz bath sinks were white, ceilings were white, even the floors were a 1″ hexagonal white tiles.  Everywhere I looked I was in awe as there were antique fixtures, pipes, and lighting, etc.
It was an amazing experience and one that if given the opportunity I would certainly repeat.

John told me he had a similar experience, however not in the same order.  He enjoyed it as well.

The following day, we opted to take the duck tour, Jackson too.  It was really not much different than any other duck tour in any city, except for its destination.  Jackson knew he was on land and the next thing he knew, he was on water.  Talk about being confused! 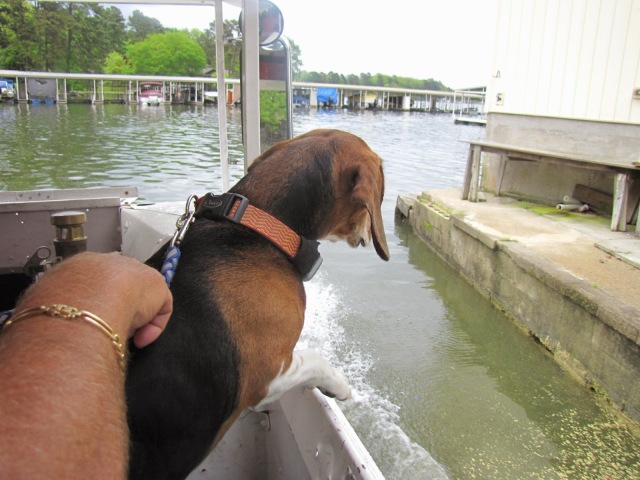 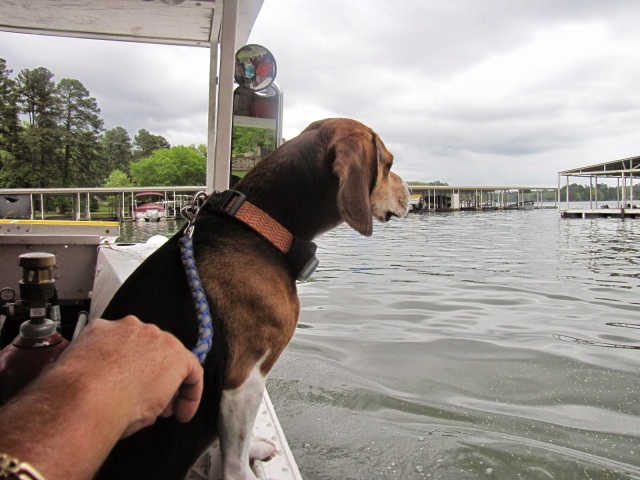 This one took us to Lake Hamilton, which is one of the three lakes in the area.  Lake Hamilton, Lake Ouachita (pronounced wachita) and Lake Catherine.  We saw the Hamilton House which was the first house ever built on Lake Hamilton and apparently became a “secret” gambling place.  The house had a 70′ underground tunnel that would lead the guests out of the house through the door (right below the house’s name) onto the backyard dock where a boat would pick them up whenever the cops raided the house.  When the cops left, the boat returned, and the party continued.  The house was sold and it became a restaurant, then sold again and it became a Bed and Breakfast Inn.  It is currently up for sale. 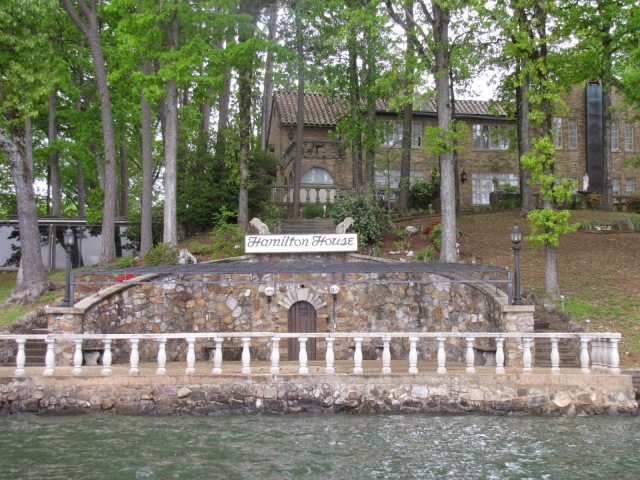 We opted to dine at the Ohio Bar a well known gangster bar still in operation.  The food was absolutely delicious and the ambiance was really a lot of fun. 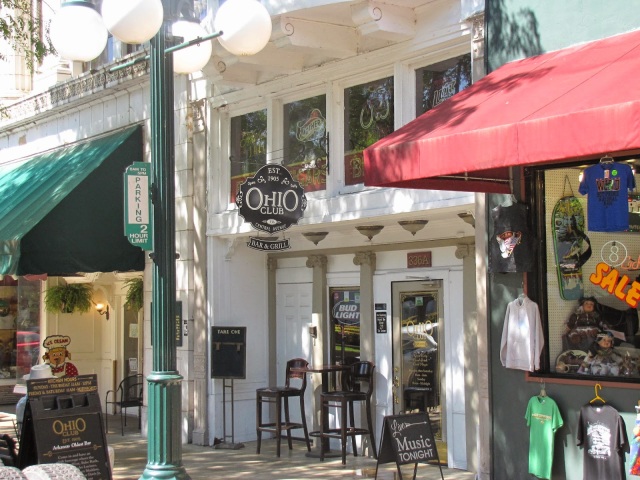 We also drove around the Hot Springs National Park and went to the top of the Mountain Tower.  The city of Hot Springs is surrounded by the National Park, so it is truly a beautiful area.  Water filling stations can be seen everywhere and people are encouraged and welcome to take home as much as they can carry. 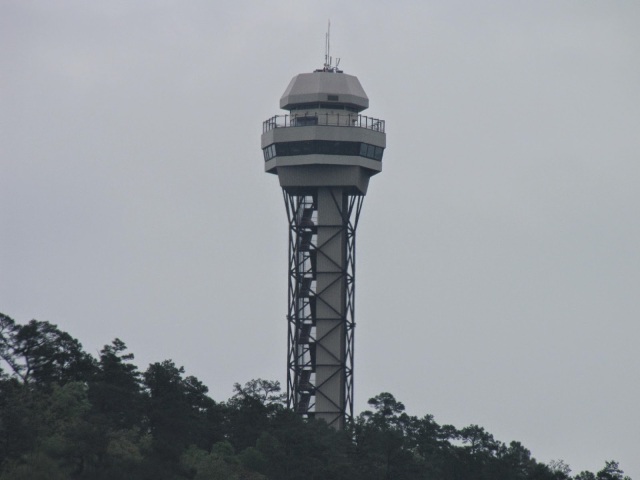 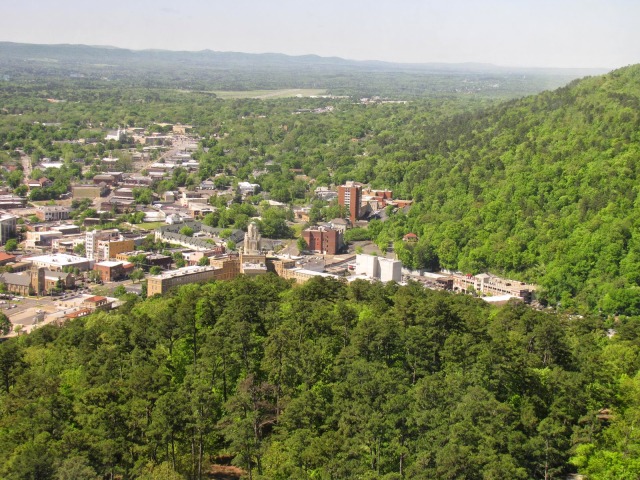 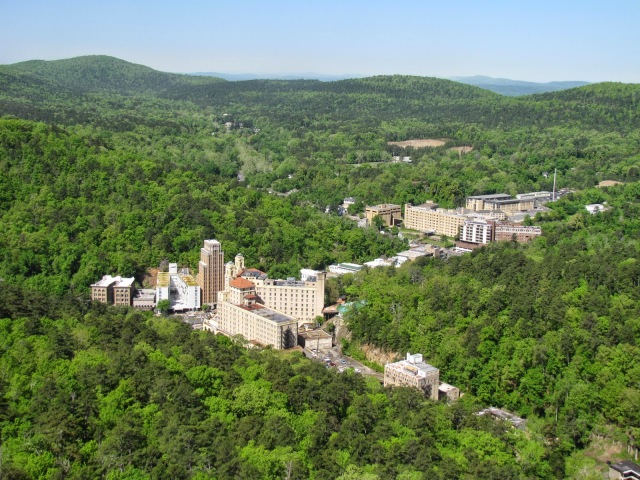 Our last night in Hot Springs, we were pelted with dime sized hail .  Fortunately we did not sustain any damage.  We left Hot Springs on our wait to Petit Jean State Park, between Russellville and Conway.