We left the Bend/Redmond area to travel a few hours northwest to Portland, the capital of Oregon, a city we have been to in the past and where John’s dear “lifelong” friend of 68 years, Arne Meeker and his wife, Valerie live.  To get to Portland from Bend we traveled along absolutely gorgeous roads with views of Mount Hood, the highest point in Oregon at 11,235′.  One can’t think of Portland without thinking of Mt. Hood, a dormant volcano that hasn’t had a major eruption in over a thousand years or more.  Let’s hope it stays that way for a long while.

As soon as we settled in, we connected with Arne and Valerie and agreed upon the adventure to be taken.  We decided to drive the Columbia River Gorge which is the natural border between Oregon and Washington and made our first stop at Vista House, which sits 733′ above the Columbia River and rewarded us with sweeping panoramas of lush forests and of course, the river.

We continued our drive and stopped to see Bridal Veil Falls, not to be confused with Bridal Veil Falls in Yosemite.  It was a relatively a short hike to see this waterfall where the upper falls is between 60 to 100′ tall and the lower from 40 to 60′ in height.

We then continued our drive and arrived at the town of Hood River, which is the windsurfing capital of the world and for good reason.  It was unreal how windy this area was and therefore, ideal conditions for such a sport.  There must have been over 100 wind and kitesurfers on the river.  We stood to watch for a while as they blew up their kites and once all their gear was secured they ran like mad toward the water where they lay down their boards and away they went.  It must take much upper body strength to control these kites, as they are lifted by the wind yet directionally controlled by the surfer. 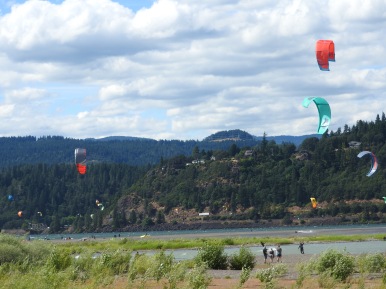 Finally, just like Cheryl Strayed mentioned in her book, Wild, we were drawn to the river and had to cross the Bridge of the Gods into Washington.  This is a bridge which sits at the convergence of the Historic Columbia River Highway State Trail, three other historic trails and the Pacific Crest Trail.  It is part of the PCT, it is a narrow bridge which hikers must share the road with cars and trucks.  It is also the lowest point on the Pacific Crest Trail.

We returned to Portland, via Washington and enjoyed a delicious lunch waterfront before crossing back into Oregon.

It was a very nice and adventurous day, yet exhausting at the same time.

Although we had visited Portland in the past, we still wanted to go downtown and see the Pearl District where loading docks and cobblestone streets remind you of days gone by, but where warehouses are now renovated to house lofts, stylish bars and eateries and also where Powell’s City of Books is located. 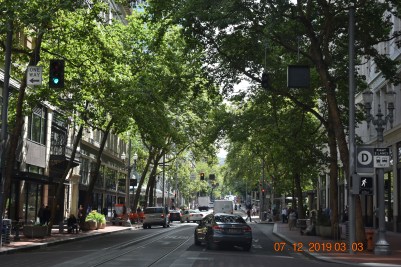 Powells is the largest independent bookstore in the world.  Its building encompasses an entire city block, has several floors and over 8 different color coded rooms for clear identification of the genre it holds.  Literally, I could get lost inside and was in awe.  They sell new, used and rare books and first editions, all behind glass cases for their protection.  If they do not have the book you are looking for, it is probably because it can’t be found. 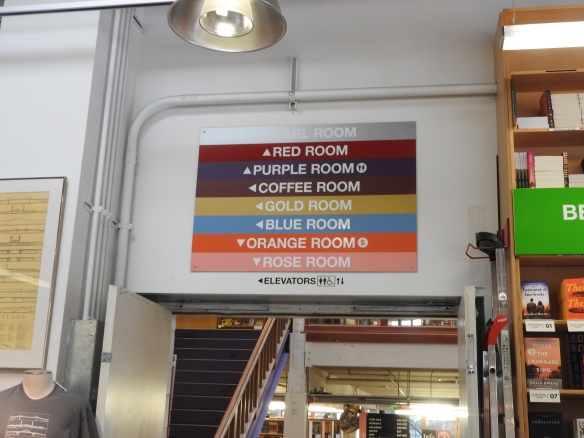 Later in the week Arne and Valerie invited us to join them at a free outdoor concert, which apparently happens very frequently in this part of the country.  Everyone brings their own beverage and could either bring a picnic or purchase their fare from one of the local food trucks, while listening or dancing, if so inclined, to pretty good music.

On our last adventure with Arne and Valerie, we drove south to Newberg, the northernmost area of the Willamette Valley and came upon a lavender festival with lots of everything lavender, from chocolates, to wines, to soaps and art.  We then visited Ethra, a local winery and really enjoyed its ambiance, its vineyard and by the way we were not disappointed by its wine either.

We had a really good time with these two good ole’ friends during our stay, yet it was time to say good-bye and continue on with our adventures.  So stay connected and we will keep you posted!

2 thoughts on “Portland, OR”